The Irish Council for Prisoners Overseas (ICPO) is honoured to receive the Gerry Ryan Community Award 2019. This award is given to an organisation each year in recognition of their contribution to the Irish community in Britain.

The ICPO has been working on behalf of Irish citizens in prison overseas and their families for 34 years and provides support and information to around 1200 Irish prisoners abroad every year. The ICPO was established by the Irish Catholic Bishops’ Conference in 1985 in response to serious concerns regarding the number of Irish men and women in British prisons. Today the ICPO office in London works with almost 1000 Irish prisoners.

The ICPO was represented at the reception in Westminster by Breda Power – London Prisons Case Manager; Liz Power – Senior Caseworker; and Ellena Costello – Project Officer with the Traveller Equality Project. The award was presented by Derry Girls star Siobhan McSweeney. Following the presentation of the award, Breda Power spoke about the work of the ICPO in Britain and across the world. Ms Power addressed some of the current challenges facing the ICPO in their work in Britain, including:

“A growing prison population that has more than doubled in 20 years… A ‘let’s get tough on crime’ mind-set and a skewed view of prisons being ‘holiday camps’, all of which serves to feed into the idea that not only is it ok to imprison those most in need but also we should throw away the key.

It has been said, ‘the true measure of any society can be found in how it treats its most vulnerable’.  ICPO works with some of the most vulnerable and marginalised Irish men and women in our society today.  We are absolutely delighted to receive this award commemorating Gerry Ryan and his life’s work.” 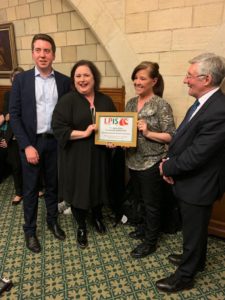